After long wait, New Jersey moves ahead on recreational pot

TRENTON, N.J. (AP) — New Jersey Gov. Phil Murphy has signed into law legislation to set up a recreational marijuana marketplace, decriminalize cannabis and loosen penalties for underage possession of the drug and alcohol.

The move comes more than three months since voters overwhelmingly approved a ballot question to legalize adult use of the drug. The Democrat-led Assembly and Senate passed the last-minute measure Monday to ease penalties on underage possession of both alcohol and marijuana as a way to secure Democratic Gov. Phil Murphy’s signature on legislation they had sent him in December.

NPR member stations share a mix of the most popular songs on their airwaves this month, including music from Amythyst Kiah, Sofia Valdes, The Weather Station and more. 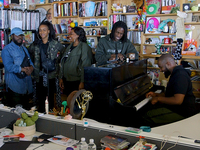