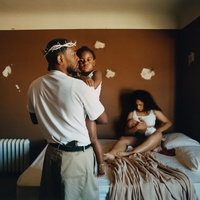 The best albums from the first half of the year include sprawling offerings from Big Thief and Bad Bunny, works of fiery introspection from Kendrick Lamar and S.G. Goodman and an abundance in between.

The songs we love from the first half of the year span a wide emotional and musical range, from wild percussive romps to raw pleas for empathy to Beyoncé's command to leave it all on the dance floor.

An indie track with an Americana twist that's equal parts joyous and contemplative.

Joan Jett reinterprets her past on an acoustic guitar in 'Changeup'

Throughout her trailblazing career, Joan Jett defied peoples' expectations of what a woman could do in music — both as an artist and as a businessperson.

The latest single from Beabadoobee's forthcoming album has a magnetic, rough-around-the-edges sound with sweetness at its core.