TRENTON, N.J. (AP) — Authorities say a 24-hour arts and music festival in New Jersey was on the verge of being shut down because of numerous fights when gunfire erupted.

One suspect was killed and 22 people, including two other suspects, were injured early Sunday morning. About 1,000 people were attending the Art All Night Trenton festival that showcases local art, music, food and films when shots rang out. Mercer County Prosecutor Angelo Onofri says numerous fights inside and outside the venue had prompted police to tell organizers that the event needed to be shut down. Authorities believe several neighborhood gangs had a dispute, and multiple suspects began shooting at each other, with police returning fire. One suspect, 33-year-old Tahaij Wells was killed. Two other suspects were injured and remain hospitalized. 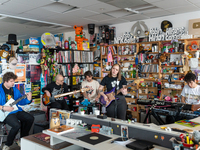