JERSEY CITY, N.J. (AP) — Authorities say a man stabbed and injured a woman and two young children inside their northern New Jersey apartment before killing himself with the knife. Jersey City police responded to the apartment shortly after 7 a.m. Monday and found the 54-year-old man with a knife wound to his throat. He was pronounced dead a short time later. A 29-year-old woman and 7-year-old boy both had puncture wounds to the neck, while a 2-year-old girl suffered a neck laceration. All three were treated at a hospital, and their injuries are not considered life-threatening. A motive for the attack has not been disclosed.

Maverick jazz composer Anthony Braxton was set to spend his 75th birthday performing at events around the world, but then... well, you know. He has two new boxed sets out this month. 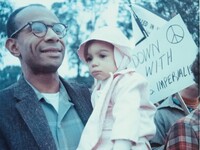 As part of an ongoing series, NPR's Rachel Martin talks to pianist Lara Downes about classical recordings of "Lift Every Voice" and "A Change Is Gonna Come," to mark Black Music Month and Juneteenth.