“Some Of Us Are Brave was a moment to pause and pay homage to Black women,” says Danielle Ponder. “My biggest cheerleaders are Black women. Bravery is what it takes to walk through this world as a Black woman, so I hope this song provides an anthem for Black women who are navigating this world with courage and strength.” In Ponder’s life, bravery manifested in the decision to leave her successful day job as a public defender to pursue singing and songwriting full time. Ponder had always been musical but chose to pursue a career in law after her brother received a 20-year sentence due to a “three strikes” law. But even as she became a tireless advocate for justice in her community—first as a public defender and later as a diversity, equity and inclusion officer in that same office—the music was never far; she remembers a time when she did a small tour in Europe and was back in court the following Monday. There eventually came a time to choose one, and so she leapt. 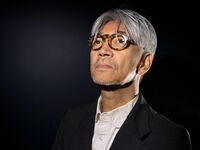 As Ryuichi Sakamoto returns with '12,' fellow artists recall his impact

The composer has been lauded for decades over his deeply affective music; director Alejandro González Iñárritu, composer Hildur Guðnadóttir and more join us to explain why.

The Chicago band pulls from a mix of Latin influences to create their unique take on psychedelic rock.

The Grant Avenue Follies are steeped in tap dance and the songs of the 1950s and '60s. But they are no strangers to hip-hop, as the track "That Lunar Cheer" shows.

Premiere: July Talk's 'When You Stop' captures everything about the band that we love

The decadelong relationship that has brought about the co-mingling and interlacing of the guitars and the powerful push and pull of the rhythms is all on display in the band's latest single.

What makes that song swing? At last, physicists unravel a jazz mystery

For nearly a century, jazz musicians have debated what gives songs that propulsive, groovy feel that makes you want to move with the music. The secret may lie in subtle nuances in a soloist's timing.