ATLANTIC CITY,N.J. (AP) — Gasoline-powered vehicles would become a thing of the past, and nine out of every 10 buildings in New Jersey would be heated and cooled by electricity instead of natural gas or oil under an ambitious plan laid out Thursday by the state’s environmental regulators. It is an effort so far-reaching and transformative of the way everyday life is lived in the state that its cost is sure to be so great that authorities did not even try to estimate it. Officials with the state Department of Environmental Protection released a report Thursday outlining the state’s progress in meeting goals to reduce the emission of planet-warming greenhouse gases.

On 'Wachito Rico,' Boy Pablo Yearns For His First Love

NPR's Ailsa Chang speaks with musicians and activists Rami Nashashibi and Drea D'Nur about their new album, This Love Thing. 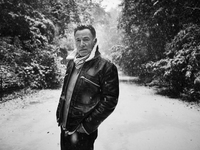 The 25-year-old trap titan discusses his songwriting process, his experience in the criminal justice system and why, even as one of the biggest rappers alive, he doesn't believe he's made it just yet.