NEWARK, N.J. (AP) — A former inmate at a federal prison in New Jersey has been sentenced to 43 months for using drones to smuggle contraband into the facility. Thirty-year-old Jason Arteaga-Loayza of Jersey City had pleaded guilty in April. The inmate also known as “Juice” was among four men charged in the plot to smuggle items into the prison at Fort Dix. The other three have pleaded not guilty. Arteaga-Loayza admitted helping to arrange flights that dropped cellphones, tobacco, weight loss supplements, eyeglasses and other items into the prison. Authorities say the drones were flown from woods near the prison and their lights covered with tape.

The remains of American-born singer and WWII hero Josephine Baker are to be reinterred at the Pantheon monument in Paris. She's the first Black woman to get France's highest honor. 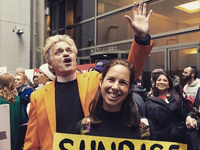