By Tom Brennan – I was invited with a few other “industry” people to a take part in a craft beer tour along the Jersey Shore.  Full-disclosure; I’m a beer nerd. I enjoy it, I like talking about it, I make it…ya’ know the whole nine.

I was also on a craft beer tour a few years ago.  It was all well and good however, I kind of forgot the tail end of it because of all the “tasting” I had done.  So, it was with an open mind I hopped on the “City Brew Tour” van at the Spring Lake Train Station and was introduced to Darren Blanco, the owner of the Jersey Shore franchise of City Brew Tours.

As we headed to Jughandle Brewing in Tinton Falls it became very clear that Darren knew what he was doing.  While driving the comfortable van he talked on a handsfree microphone that we could all hear in the cabin.  This discussion started with us introducing ourselves and what our favorite beer styles.  Then Darren started talking about the history of beer.  He even brought up some things this beer nerd didn’t know and some interesting takes like it took 230 million gallons of beer to build the pyramids in Egypt.

When we arrived at Jughandle Darren brought over a pitcher of Goldfinch (a favorite of mine) and poured each guest a 2-ounce taster.  We also got introduced the City Brew Tours “flavor wheel” card lodged in our lanyards that displayed out name and favorite beer style.  This card got the crowd talking about the beers we were trying.

Darren had worked construction for about 25 years and decided to try something different when the pandemic hit.  He went exploring new careers and almost was out of options.  It was right around that time that a friend sent him a link to a franchise opportunity with City Brew Tours.

Soon after we talked over Goldfinch Darren grabbed Without Limits 22, Jughandle’s version of a California common and we walked over the brewhouse.  While sipping on that beer Darren talked about the entire brewing process.  From milling the raw grain, to “the mash” (mixing the water and grain), to boiling the wort (the liquid left over from the mash) and the addition of hops.  He then talked about fermentation and how breweries package their products. When we got back to the table Darren had us try Bee Sting, their honey Saison.

We had one more taster of their hazy IPA called “Hopside Fakie” and the group talked about what they thought about that beer.  I also noticed that the pitcher of beer Darren was using had marks along the side, as to measure how many tasters to pour.  That reinforced to me that this tour was about beer not drinking beer.

As that hit me we headed back on the van to head to Alternate Ending.  While on the way to Aberdeen Darren went on to talk about more beer history.  He linked how witches were more than likely burned at the stake because women at the time would make beer with local ingredients.  That was against the control the church had on beer ingredients at the time. The women would hang brooms above their doors when their beer was ready.

The Alternate Ending the crew had a paddles of 4 tasters ready for us as we walked in the door.  It included Why Not? (their flagship pale ale), What If? (flagship IPA) Scuba Squad (saison) and Royal Rug (slow pour pilsner).  It was then that another thing struck me…Darren wasn’t asking our favorite styles of beer earlier just for conversation.  He was planning future conversations based on the beers we were tasting…some of our favorite styles.

After taking a tour of their brewery, which had a ‘wild fermentation room’ and horizontal tanks we came back to find that our table had some wonderful sourdough pizza and a side salad.  Darren had mentioned that eating something is ideal while tasting beers.  No need to convince me, Alternate Ending has some great pizza (made my Tahlula’s).  It was just another thing to talk about with a group of people I had just met.   We finished off our pizza and paddles and headed back for the train station on this abbreviated “press tour” of craft beer on the Jersey Shore.

Our tour guide, Darren, was a star of this adventure.  His knowledge, curation, and friendliness is what made this tour so good.  He ability to move the conversation and cater the beers to our tastes was exactly what this beer nerd needed on a hot summer day. 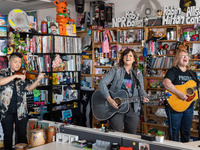 Amy Ray and Emily Saliers have been offering life lessons to their fervent fans for nearly four decades; here, they play a set of stone-cold classics, including "Closer to Fine." 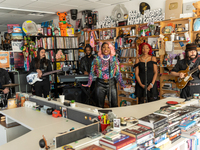 NPR Music's Tiny Desk series kicks off a celebration of Black History Month with this stunning performance from Lady Wray.

The brothers' Tiny Desk performance is the perfect, slow-burning introduction to their music.