TINTON FALLS, N.J. (AP) — Monmouth County is paying some birds more than humans to rid its garbage dump of seagulls.

Officials believe the $450,000 it spends on 10 falcons is worth it to avoid fines from the state. The state requires the county to minimize the number of insects, rodents and birds around its dump.

The county has had falcons on patrol at its landfill in Tinton Falls since December 2011.

Superintendent Richard Throckmorton tells the Asbury Park Press (http://on.app.com/UyLyRs) he had tried every method to prevent seagulls from flocking around the garbage, but nothing worked until he got the falcons. 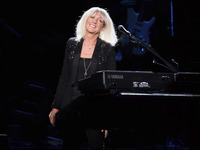 President Bajram Begaj recognized Lipa, the daughter of Albanian immigrants, for her musical talents and contribution to spreading international awareness of Albania.