TRENTON, N.J. (AP) — New Jersey would change the age for purchasing rifles and shotguns from 18 to 21 under legislation an Assembly committee has advanced. The Assembly Judiciary Committee passed bills Wednesday aimed at tightening the state’s already strict gun laws. The measure comes after fatal shootings in Texas and New York in which authorities identified the shooters as 18-year-olds. The fate of the age bill is uncertain because the state Senate has not so far taken up the measure. Under current law, New Jersey requires residents to be 21 to purchase a handgun. The new measure would raise the age threshold to 21 for those seeking to purchase rifles and shotguns.

Stripped to the bones: Why a new NYC concert hall sounds so much better

The new David Geffen Hall in Lincoln Center, home of the New York Philharmonic, opens this week. And while the outside is the same, everything inside has changed.

With new makeup line, you too can look like heavy metal's Prince of Darkness

In heavy metal, heavy eye liner is almost part of the gig. So maybe it's not surprising that Ozzy Osbourne is launching his own cosmetic line. Eye shadow palettes are shaped like bats and coffins.

Loretta Lynn, the country music star who brought unparalleled candor about the domestic realities of working-class women to country songwriting, died at her home in Tennessee on Tuesday. She was 90. 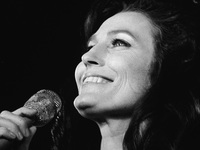 The country singer brought unparalleled candor about the domestic realities of working-class women to country songwriting over the course of her 60-year career.