TRENTON, N.J. (AP) — One month into existence, New Jersey’s recreational marijuana market has done $24 million in sales and regulators on Tuesday voted to grant permits to nearly a dozen new recreational cannabis retailers in their first public meeting since the market opened to the public last month. How long before the new dispensaries open, though, isn’t clear, and there will be additional regulatory hurdles before the new shops start selling to adults 21 and over. Regulators also said the 13 facilities open for recreational sales did $24 million in business, averaging about $5 million a week and conducting 212,000 transactions. 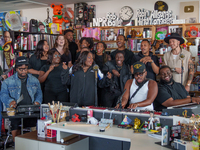 Larry June is the indie-rap hustle personified. Though the Bay Area emcee has a prodigious output, his (home) concert reflects the comfortable, laid-back tone of his records.

In the hallowed halls of London's St. Matthias Church, the innovative musician performs a cathartic set, including her new song "killer."