Grew up in Manasquan, where I forged my working papers so I could get a job in a local restaurant. Started in radio when I was 17, then jumped into the record business at 18, lying about my age like a mad-man. Got back into radio in my early 20’s, when I was named program director of WHTG, which we changed into FM 1063 (recognized by the industry as one of the first and most influential alternative rock stations in the country).  Left FM1063 after a little more than a decade, heading out west to work on a couple of radio stations in New Mexico; after a few years, I moved back to the NYC area to get back into the record business.

After that label ( and then another one) were both absorbed by bigger companies, I spent the next few years on Sirius Satellite Radio, working on several channels, before I was lucky to rejoin my Alma Mater (Brookdale Community College), and program 90.5 The NIGHT. Over the years, I’ve been fortunate to travel around the country, and work with artists from Belle & Sebastian to Rush, Rob Halford to Little Feat, but my biggest thrill has always been, and continues to be, putting on a pair of headphones, and being on the radio.

It was the year of "Stacy's Mom," "Seven Nation Army" and "Hey Ya," along with several excellent albums from singer-songwriters and Warren Zevon's final studio album. 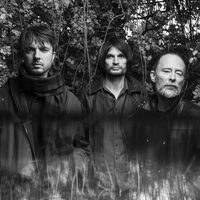 The Smile, 'You Will Never Work In Television Again'

At the close of every year, there's always this question: "What records from this year, that we're raving about now, will we actually be listening to in 20 years?" Turns out, 2002 was a strong one.