Over the past 16 years, Rebelution has had nearly everything a band could ask for: chart-topping albums, hundreds of millions of streams, a GRAMMY nomination, even their own festival in Jamaica. The only thing they haven’t had, it seems, is time. “When COVID hit, we found ourselves in uncharted territory,” says frontman Eric Rachmany. “Suddenly we were just sitting still, which was a completely new experience for us.” Difficult as it was to leave the road behind, pressing pause proved to be a blessing in disguise for the band, one that led to their captivating new album, In The Moment. Recorded remotely in the midst of the coronavirus pandemic, the collection is deliberate and wide-ranging, infusing the quartet’s soulful, exhilarating brand of modern reggae with addictive pop hooks, alt-rock grit, and hip-hop grooves. Founded in Isla Vista CA, the members of Rebelution have followed their instincts to remarkable success since the release of their breakout 2007 debut, Courage To Grow. In 2009, the band topped the Billboard Reggae Chart for the first of what would be five consecutive #1 records; in 2014, they boasted the highest-selling reggae release of the year; and in 2017, they garnered a GRAMMY nomination for Best Reggae Album. Rebelution’s transcendent live performances, meanwhile, took on legendary status, earning the group sell-out headline shows everywhere from Red Rocks to The Greek Theatre along with festival slots at Bonnaroo, Lollapalooza, ACL, Glastonbury, and more.

From the lush gardens of The Houdini estate in Los Angeles, the influential Atlanta rapper premiers songs from his forthcoming album, Punk.

Vince Staples brings the sound of his new self-titled album to life for his Tiny Desk (home) concert.

The Australian singer-songwriter performs four songs from her album To Enjoy Is the Only Thing. 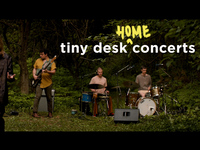 The Canadian band led by Tamara Lindeman plays four songs from their latest album, Ignorance somewhere in the woods of Mulmur in Southern Ontario.