TUCKERTON, N.J. (AP) — There’s no reports of damage or injuries after a small earthquake occurred in southern New Jersey. The U.S. Geological Survey says the 2.4 magnitude quake occurred just before 8 a.m. Wednesday near Tuckerton in southern Ocean County. Officials say it had a depth of about three miles and light shaking was felt. Roughly 100 people reported feeling the earthquake, with most of the reports coming from nearby Little Egg Harbor Township. The earthquake is the first one reported in New Jersey in more than six months.

Prosecutors Say They Have Evidence Of More Abuse And Bribery In The R. Kelly Case

Federal prosecutors in New York filed a request on Friday that they be allowed to enter more evidence of uncharged crimes allegedly committed by the R&B singer in his trial next month. 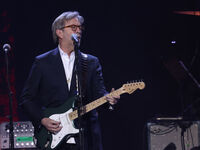 On social media late Wednesday, the musician wrote: "I wish to say that I will not perform on any stage where there is a discriminated audience present." The NEA celebrates the 40th anniversary of its Jazz Masters Fellowship and inducts the class of 2022, including four jazz icons: Billy Hart, Stanley Clarke, Cassandra Wilson and Donald Harrison, Jr.

The Debate Over Wording In Bruce Springsteen's 'Thunder Road' Is Settled

The song begins: "A screen door slams, Mary's dress ... and, what is Mary's dress doing: swaying or waving. The Boss's co-producer Jon Landau told The New Yorker that the correct word is "sways."