Smoking ban talk nixed, but workers get loud outside casino

ATLANTIC CITY, N.J. (AP) — Irate that a session to discuss a proposed smoking ban during a casino industry conference was canceled, casino workers and patrons opposed to smoking in the gambling halls held a noisy protest outside the meeting Thursday in New Jersey. About 100 people rallied outside the Hard Rock casino in Atlantic City, demanding that the state Legislature act on a bill to ban casino smoking that has the support of more than half of state lawmakers and Gov. Phil Murphy. The bill has been stalled without a hearing in a state Senate or Assembly committee, and a similar measure died without a vote last year as well.

It's no crime for a song to be anodyne, but LCD Soundsystem made a career out of barely skirting that line.

This week's Heat Check playlist gathers artists from across the spectrum: a grime king retaking his throne, Cardi B signal boosting the summer's most exciting newcomer, risers and covert stars. 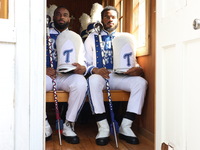 The massive sound of The Aristocrat of Bands, a highly respected HBCU marching band, and the overflowing history of gospel combine on a single album (with a great title) — 'The Urban Hymnal.'

At turns both spoken and sung, the song revives a Weird Old America standby.