“Everything sort of lined up, but I don’t believe in coincidences.” Chlo White could be talking about any of the several key moments in her musical history: meeting best friend and bassist Riley Hall on the first day at a new school while they both wore the same pair of obscure Vans, being soon introduced to guitarist Mick Martinez that same week, and then finding drummer Max floating around their garage practice space. That might’ve been the easiest part of the puzzle. He’s Mick’s brother. Snarls, the Columbus band built from these cosmic connections, is an exercise in manifestation. After their debut album Burst captured an early audience with its glittering, wide-eyed take on indie pop, the band regrouped to enter the cavernous wilderness of their next phase. “We had time to stew on this new aura our band has for this release. We have entirely new musical influences, and working with Chris Walla—that’s when it hit me that we’re in a band,” White gushes. If Snarls had to fold up their new aura into an easily packaged hype paragraph, they probably wouldn’t. “We’re in the ‘pressed flowers’ phase of our band,” White continues. “Burst was taking a fistful of glitter and throwing it, but this EP was more intentional.”

The pop star has spent a life on the go, so the pandemic offered him a rare chance for reflection, to separate the person from the pop star. Also, of course, to record a new album.

Vangelis composed the music for Blade Runner and Chariots of Fire, which won him an Academy Award. 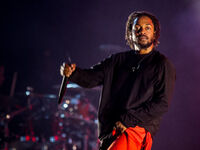 NPR's Rachel Martin talks to writer Raquel Willis about Kendrick Lamar's song "Auntie Diaries" which has divided trans people with its story of how he came to accept his relatives' gender identities. 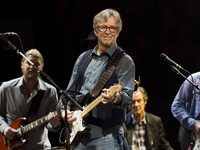 The 77-year-old guitar legend has been a critic of coronavirus vaccines and pandemic restrictions. He has tested positive for COVID-19 and canceled two upcoming European gigs.

In 2013, Cierra Bosarge asked Cole to attend her high school graduation. He did and said he would be at her college graduation if she got into a 4-year school. She graduated last week; he was there.