POINT PLEASANT BEACH, N.J. (AP) — If what doesn’t kill you truly makes you stronger, then Titan is the strongest turtle in the ocean. The juvenile Loggerhead turtle has been gashed by a boat propeller, had part of his front flipper bitten off by a shark, and was being attacked by a different shark when two New Jersey fishermen saved him. They called Sea Turtle Recovery, a group that rescues and rehabilitates turtles before returning them to the ocean. Tuesday morning, Titan was among eight turtles returned to the sea in Point Pleasant Beach after being nursed back to health. The group has returned 85 rehabilitated turtled to the ocean since 2016.

The two Tiny Desk veterans bring a spirit of serious fun to each other's songs.

The talented cohort of jazz artists perform a selection of songs that reflect on isolation, social upheaval and hope.

The jazz duo known for dazzling, brilliant live performances delivered at the Tiny Desk, with a set of songs from its debut album. 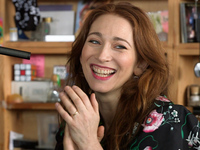 Spektor performs songs filled with truth and whimsy from her astonishing new record, plus some old favorites.

The singer-songwriter performs a selection of tracks from her forthcoming album, Revealer, that are alive with new sensations.