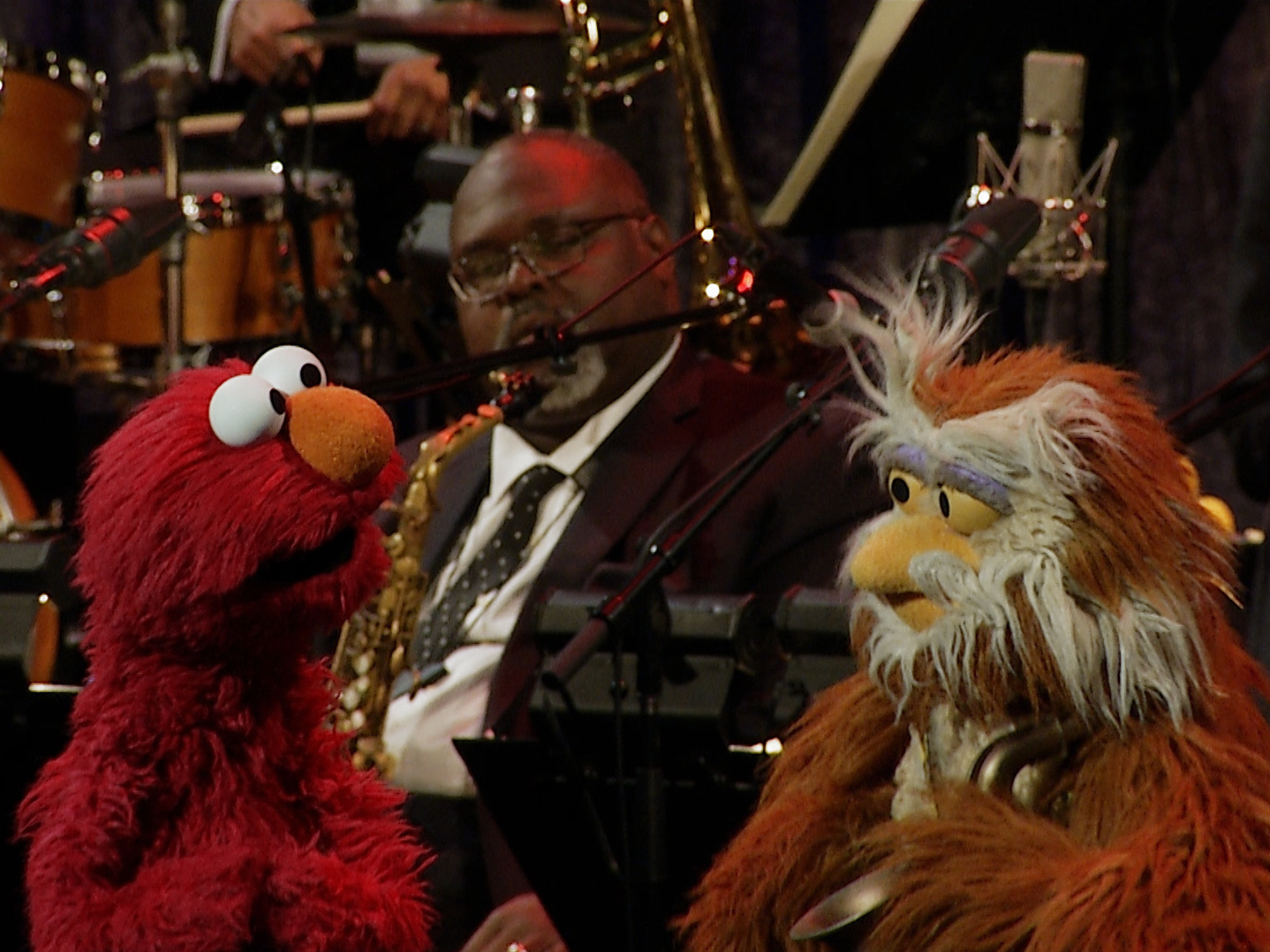 It's no shocker that jazz and Sesame Street go hand in hand. The show has a long tradition of featuring jazz artists, such as Wynton Marsalis, as special guests, and some of the TV show's most famous music has found a life within the jazz ecosystem. These topics were all explored on a recent episode of the radio show Jazz Night in America, which also featured concert material from A Swinging Sesame Celebration at Jazz at Lincoln Center.

But, radio can only go so far. To see the Sesame Street gang on stage with the Jazz at Lincoln Center Orchestra with Wynton Marsalis... let's just say be careful not to sprain yourself smiling.

We're premiering a duet between Elmo and Hoots the Owl. The characters Hoots and Elmo are old friends — Elmo joined Sesame in 1980, Hoots in 1985 — and their friendship shows on stage. Christopher Thomas Hayes, who plays Hoots the Owl, spoke to us in character about their performance. "It doesn't matter what you sing about as long as you're doing it," he hooted. "It helps when you're with a friend, too. I love jamming with Elmo. He's only 3 and a half but that guy's got some chops, man! I'll tell you that!"

"It Feels Good (When You Sing A Song)" kicks off with some stage banter from Elmo and Hoots. Trumpeter Kenny Rampton chimes in, along with some other members of the orchestra, before they all launch into the rockin' number. In addition to playing with the JALCO, Rampton is also a member of the Sesame Street band. "It really was worlds colliding," he said. "A really beautiful experience for me personally."

After 50 years, Sesame has earned international recognition. Millions of children worldwide watch every year. "When I think about the first time that a kid hears the sound of a trumpet, it may very well be me on Sesame Street," Rampton said. "It's just an amazing thing to be a part of on so many levels. "

As far as Hoots the Owl, the sound of his horn on stage at Jazz at Lincoln Center is saxophonist Sherman Irby. Also in the broadcast, Ted Nash plays sax — poorly — as Ernie for "Put Down The Duckie" and Elmo and Wynton Marsalis put a new take on "Elmo's Song."

PBS will air the concert from Jazz at Lincoln Center on Friday, Oct. 30, with on-stage skits and new arrangements on classics, and deep cuts, from the Sesame Street songbook.

St. Vincent, Builder Of Rock Futures, Takes Shelter In The Past

Fourteen years after her first album as St. Vincent, Annie Clark makes a sharp turn in time with Daddy's Home, a '70s rock revue that nails the sound, if not the spirit, of its influences.