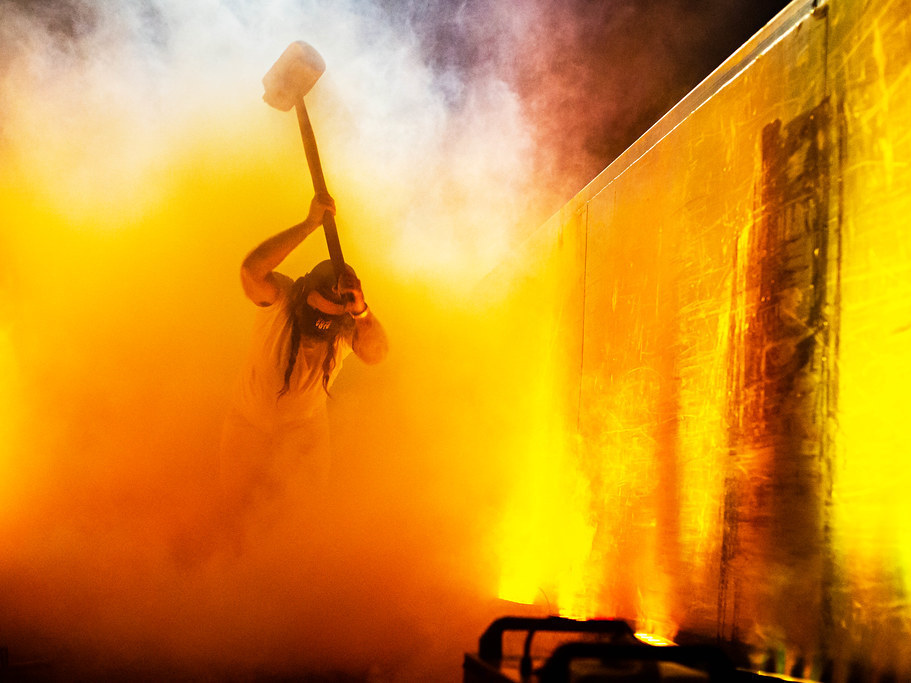 Buried beneath the awful human toll of the pandemic is collateral damage done to businesses dependent on people coming through their doors. None have been harder hit than music venues, which count on — or rather, survive — by packing as many people shoulder to shoulder into their four walls as often as possible.

In Austin, home to hundreds of places to see live music, the shutdown has been acute and punishing. It began when the iconic restaurant Threadgills, which for decades featured live music as their main side dish, called it quits. Many closures would follow, including downtown indie-rock mainstay Barracuda.

Accelerated growth in Austin was already putting the squeeze on downtown rents, even pre-pandemic. Barracuda owner Jason McNeely explained their decision: "When people come into a music venue, they see it when it's packed. But the rest of the week, it's an empty space that doesn't really generate a lot of income for us."

Yet for a city that champions itself as a bastion for live music, the urgency did not seem to be felt. Back in August 2019, the city agreed to distribute a portion of hotel taxes to help venues meet their rising costs. It would be December 2020 before the city council requested a plan for distributing the $2.5 million.

Similarly, only a small portion of $31 million in CARES aid received in the summer — $800,000 — went toward helping music venues.

Meanwhile, with most venues shuttered and landlords threatening eviction, the situation grew even more desperate. As outlined in our story "Running Out the Clock on Austin Music Venues," local musicians and venue owners began demonstrating in front of City Hall, which eventually bowed to public pressure and announced a SAVES initiative in October that went online in late December; it included $5 million in aid for music venues and another $5 million for legacy businesses. Meanwhile, venues had to decide if they could carry on. And how.

"Some of them are having to do things that they're not comfortable or ready to do," said Rebecca Reynolds, president of the Austin VenueAlliance. "It's a matter of public health."

Adding insult to injury, one of the city's most important concert promoters, Margin Walker, announced in December it was shutting down.

Now, even with eviction bans extended and some aid beginning to flow, the situation is still far from resolved.

Throughout the shutdown, our KUT News reporters, Pause/Play podcast hosts, and multimedia producers have covered everything related to our beloved music venues' survival. Here are their stories. --Jeff McCord

In the third episode of the Pause/Play podcast, hosts Elizabeth McQueen and Miles Bloxson speak with owners of two longtime music venues about the ongoing uncertainty surrounding the return of live music in Austin.

Listen as Brodie Elkins tells the story of Scratchouse, which closed due to the pandemic. Then Maggie Lea and Tamara Hoover talk about how they've kept their venue, Cheer Up Charlies, afloat and explain what it's been like to get ready to reopen.

The Unsteady Return of Live Music

In the fall of 2020, live music slowly started returning to venues able to follow new safety precautions put in place by city and state health officials. In a two-part series, the Pause/Play podcast featured people across the spectrum of the Austin music scene to talk about their live music experiences during the pandemic.

In the first episode, you'll hear from several musicians about their first performances since the beginning of the pandemic, a local promoter on new challenges facing live events, and host Elizabeth McQueen from the perspective of an avid live music fan.

In the second part, Pedro Carvalho and Lawrence Boone from the venue The Far Out Lounge talk about how they've managed to stay open and have consistent live music. Then, KUT reporter Andrew Weber takes you to a show called Dumpster Fire. Matt Ott from the Austin non-profit Black Fret brings you perspectives from an indoor show at ACL Live. And host Miles Bloxson talks to three fans about their risk tolerances and relationships with live music during COVID.

With the live touring industry shut down since March, and with little hope of it resuming anytime soon, the company stated in its announcement on social media that the decision 'pretty much made itself.' In this episode of the Pause/Play podcast, Graham Williams, the founder of Margin Walker, discusses his journey in the Austin music scene and explains why nine months into the pandemic he decided to close Texas's largest independent concert promoter for good.

In this episode of the Pause/Play podcast, festival founder Homer Hill tells the story of the Urban Music Fest and how it's been hit hard by the pandemic. You'll also learn the history of the festival, and hear the challenges Hill has faced in his 30-plus years as a Black business owner in Austin.

The 20-year-old musician joined us from her home in Panama City for this mini-concert.

BENEE, The Artist Behind A Viral TikTok Hit, Gets Serious And Weird

What's it like to have a song go viral on TikTok and rack up a half a billion plays on Spotify? Host Stephen Kallao talks with up and coming New Zealand artist Benee in this session.

The National's lead singer set out to create something warm and welcoming on his new album, Serpentine Prison.

Cozy Up With Andrew Bird As He Performs Holiday Songs From 'Hark!'

Bird's holiday album is a collection of covers and originals that some might not view as Christmas material at all.