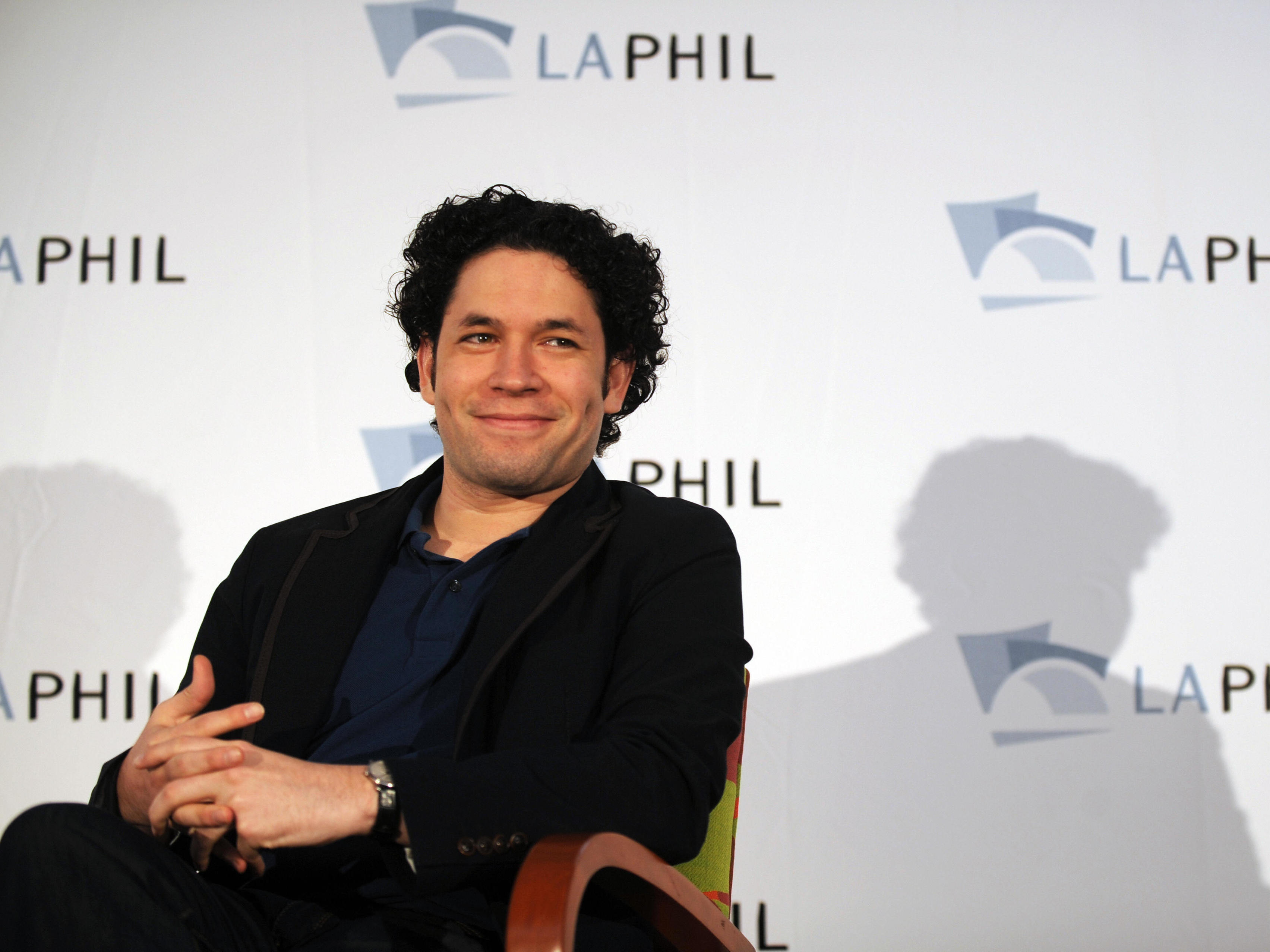 Gustavo Dudamel during a press conferece on Sept. 30, 2009 in LA, around the time he was named the music director of the LA Philharmonic. // AFP via Getty Images, Gabriel Bouys


After months of lockdown, on a glorious sunny day, I got to watch the Los Angeles Philharmonic rehearse at the famous, near-empty Hollywood Bowl. A year into the pandemic, live concerts are still a rarity in this country, but the LA Phil has been recording concerts here for its online Sound/Stage series.

There were only about seven others scattered in the audience of the vast amphitheater; in sneakers and jeans, conductor Gustavo Dudamel led the orchestra in a piece by composer John Adams, Grand Pianola Music.

Onstage, the musicians were seated 12 feet apart, all wearing facemasks except for the wind players, who were each isolated with plexiglass partitions around them.

"As soon as you start playing, all you hear is yourself," Greg Roosa, the LA Phil's second horn player, told me during a break. "It's really, really hard to kind of hear off in the distance, and you have to really watch the conductor."

Roosa's wife, Amy Jo Rhine, is the orchestra's third horn player. She added, "We have to be hypersensitive to everything that's happening around us, even more so than normal."

Dudamel told me he and his orchestra were anxious to perform together, so they were up for anything, including the plexiglass walls. "It creates a different acoustic environment that we are not used to," he said. "But, you know, we decided to take the challenge. And it was very, very, very challenging."

The concerts the LA Phil recorded last summer and fall are featured on the Sound/Stage series, which streams on its website. The first season opened with an episode called "Love in the Time of COVID," complete with overhead shots of the lonely Hollywood Bowl and Los Angeles, and a reading of a Pablo Neruda poem.

The second season, which begins today, March 5, launches with a performance of Camille Saint-Saëns' The Carnival of the Animals. In addition, Dudamel's nine-year-old son Martín and other children narrate animated folktales.

In other episodes, Dudamel interviews celebrity friends about their musical inspirations, similar to a fundraising series the LA Phil released this past month with the conductor in conversation with Katy Perry, Julie Andrews, Common and others.

"It's been a very difficult time for this orchestra, and it's great they've been able to keep up their spirit of experiment and innovation at this period," said Alex Ross, classical music critic at The New Yorker. He was also invited to watch the orchestra perform at the Hollywood Bowl last summer.

Ross says the LA Phil is known for championing new and diverse music, and that this series goes far beyond videotaped concerts some other big orchestras have made during lockdown. "They haven't pretended like everything is normal," he said. "So you see the orchestra on the stage of the Hollywood Bowl, but then you see all the empty seats, so you're reminded the audience is absent. There's a kind of a loneliness. And I think they've been able to use that as a kind of expressive way to show this yearning of the musicians and Gustavo Dudamel to reach out to the audience that's not there."

During the past year, LA Phil musicians continued to be paid, but the orchestra lost much of its revenue from the concerts it holds at the Hollywood Bowl, the Ford and Disney Hall. Two of the musicians, flutist Cathy Karoly and her cellist husband Jonathan, collected donations for the orchestra by putting on their own series of chamber music recitals outside their home in Pasadena.

"My colleagues and I had very different ideas about how long we would be out of work, ranging from a couple of months to me saying, no, this is going to take more than a year," said Karoly. She says she and her husband wanted to continue playing music and not get rusty. They said they were happy to return to the Hollywood Bowl to tape the Sound/Stage concerts.

Percussionist Matthew Howard agreed with them that being back onstage together was amazing. "Even with these restrictions," he said, "it just feels so nice to make music with people, not via Zoom."

The Americana star performs a Tiny Desk from an empty Mercury Café in Denver.

Watch the Dominican-born guitarist get groovy with his band in this special Tiny Desk Meets SXSW performance.