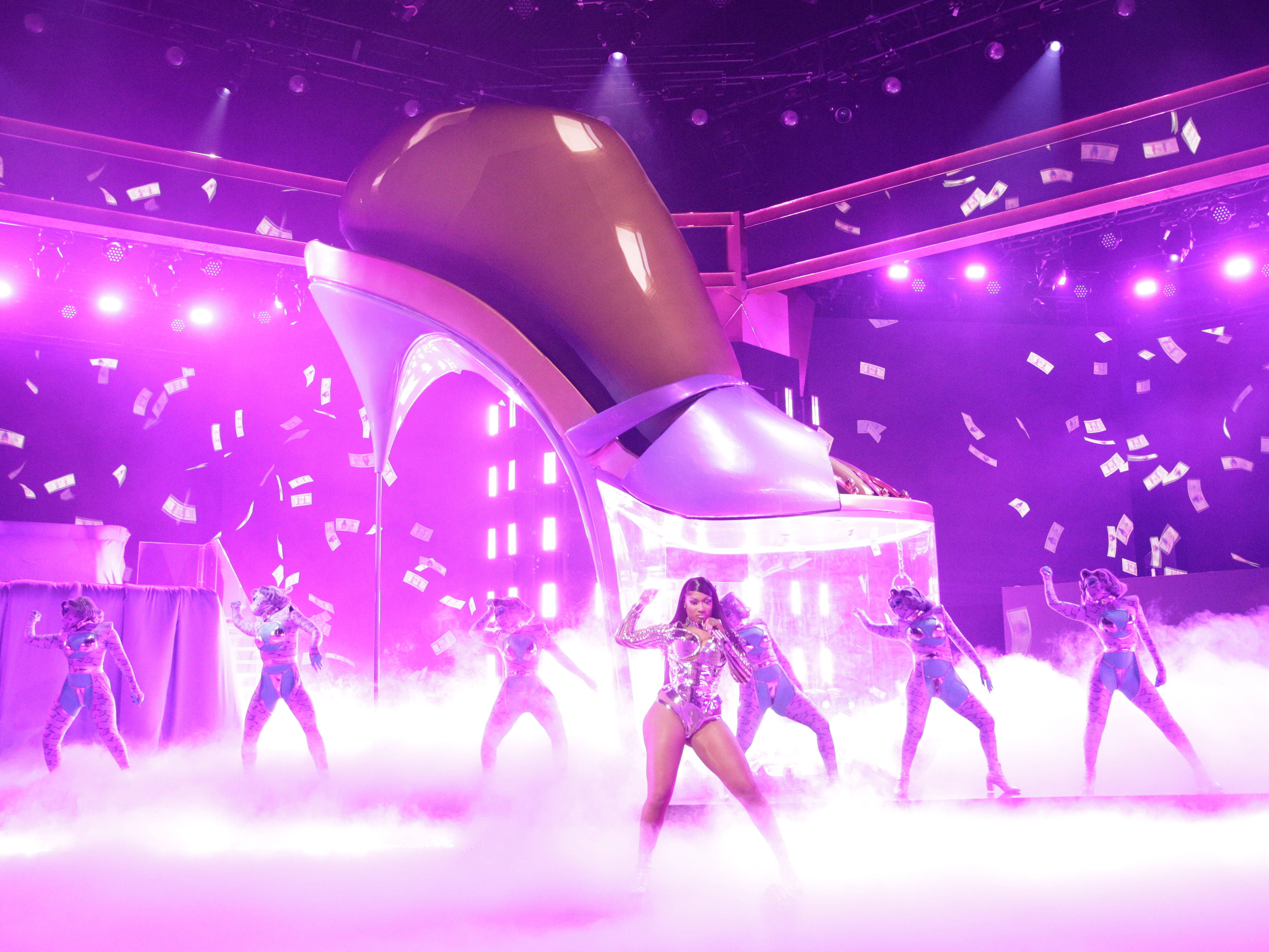 "You deserve this." Removed from context, you could call those words an advertisement for everything the 2021 Grammy Awards got right: knockout performances, moving tributes to those lost and suffering, an energizing presentation that crisscrossed genre, gender, race and language, all briskly delivered to viewers who had spent a full year in bitter isolation. We deserved a good show, and we got one. But it wouldn't be the Grammys without a dose of cruel traditionalism and a few familiar mistakes.

When she spoke those words from the stage at the end of the evening, Billie Eilish was attempting to account for one of those mistakes. The record of the year award she'd just received for "Everything I Wanted" — a midtempo contemplation of fame, broken and stripped of her trademark haunted trap — belonged to someone else, she said. Like Adele awkwardly dismantling her golden gramophone as she heaped uneasy praise on Beyoncé in 2017, Eilish devoted most of a flustered acceptance speech to the Black woman behind "Savage (Remix)," who had won in a genre category but narrowly missed the night's top honor. "I was going to write a speech about how you deserve this, but then I was like, 'There's no way they're going to choose me. You deserve this. You had a year that I think is untoppable. You are a queen. I want to cry thinking about how much I love you. ... Genuinely, this goes to her. Can we just cheer for Megan Thee Stallion, please?"

The timing couldn't have been worse, because up until its last few uncomfortable moments, the 63rd annual Grammy Awards — now the chef-d'oeuvre of Carpool Karaoke producer Ben Winston instead of longtime showrunner Ken Ehrlich — offered petit pleasures one after the other, most notably in 23 live performances where stadium-level superstars played to one another in the round-robin format of rap cyphers (or, as many noted, the British television mainstay Later... with Jools Holland). Without the usual transitions and applause breaks, the broadcast moved quickly and intentionally. But more than that, the ravenous desire for live music's return felt palpable on both sides of the screen, and the performers seemed exceptionally driven to deliver.

Bad Bunny and Jhay Cortez performed "Dákiti" in Y2K retro-futuristic garb. Megan Thee Stallion performed "Savage (Remix)," which would win best rap song and best rap performance, before linking up with Cardi B for an athletic sex medley on "WAP." Taylor Swift reinvented cottagecore. Beyoncé, who didn't perform and wasn't expected to attend, made a seraphic impression when she appeared in the audience, wearing a face mask that seemed in certain shots to be holding itself in place, no strings attached. Harry Styles, formerly of One Direction, opened the show with special guest Dev Hynes of Blood Orange sitting in on bass, and went on to win the award for best pop solo performance, a rare honor for an artist from the boy-band cohort. (I wish I could say the same for BTS, but the Academy may still be still a few years out from recognizing K-pop.)

As for the awards themselves, the voting felt conspicuously more in tune with the culture it is meant to represent — although the most celebrated victories were served with sobering context. Megan Thee Stallion took home the first statue of the televised part of the night, for best new artist, becoming the first woman rapper to win the award since Lauryn Hill in 1999. (She seemed genuinely stoked to be there, a reminder that even in the most dated institutions, recognition feels good.) Beyoncé's career total jumped to 28, making her the singer with the most Grammys ever, while underlining the stunning fact that only one of her wins has been in a major category. Bad Bunny, already a two-time Latin Grammy winner, won his first "gringo Grammy" for best Latin pop or urban album. It's unclear why the word "urban," a loaded euphemism for "nonwhite," persisted here even after being removed from hip-hop and R&B categories. In the televised portion of his acceptance speech, as in his performance, the artist spoke to the industry in Spanish without translating.

A few of the flagship awards, too, were presented by employees of independent music venues decimated by the COVID-19 pandemic. In other years, a quick cut to the owner of Nashville's Station Inn or a bartender at Los Angeles' Hotel Cafe might have felt like shoehorned charity work. Here, it aligned with a subtle message of the evening: Music takes place on stages and in rooms around the country, not just on the big Grammy stage, at Grammy scale.

For the most part, it worked. Award shows are so often frustratingly flat, and the 2021 Grammys were lush by comparison, filled with more live music than most viewers had seen all year. The slate of performers and the roster of winners were artists who receive regular radio play, who defy genre lines and reject hegemonic convention, who would be just as likely to receive a People's Choice Award. Self-evident truths like the cultural dominance of hip-hop and R&B, a Spanish-speaking listenership at critical mass, a year defined by gutting loss and a concert industry fighting for its very existence, did not go unheeded. And more than a few times, the months of collective anxiety and exhaustion seemed to fuse into a delirious energy onstage. It was the celebrity worship we know, packaged as the expertly choreographed escapism we need right now.

But escapism, of course, is not escape. And Eilish's win at the end of the night wasn't the only time you could feel some of the gears locking back into place. Mickey Guyton, the first Black woman ever nominated as a solo country artist, lost in her category before taking the stage to perform "Black Like Me," a song rooted in her own experience of marginalization in the industry. (Hip-hop fans know this pain: In 2019, Drake, Kendrick Lamar and Childish Gambino all declined to play the ceremony, so overwhelming was the sense that rappers are nominated in major categories as enticement to perform, not because they have a chance of winning.)

Guyton was part of a suite of performances by Nashville women, which also included Miranda Lambert, Maren Morris and, in a prominent cameo, John Mayer — an inexplicable selection, especially following the alleged coercive behavior outlined in Jessica Simpson's 2020 memoir, Open Book. DaBaby, Roddy Rich and Anthony Hamilton gave "Rockstar" a orchestral remix backed by two-stepping boomers in Supreme Court robes, though the song's own success this year would have sold it without those touches of Eurocentric sophistication.

And when Cardi and Megan's "WAP" performance concluded, host Trevor Noah stepped onto the massive mock-bedroom set and joked, "I just realized something. This is a dream that I've had — to be in bed with Cardi B. And then my grandmother comes in and whoops our asses for having our shoes on in the bed." In another year, the line might have gone uninterrogated. In 2021, seen next to moments as sincere and affecting as Brandi Carlile's tribute to the late John Prine in a gut-wrenching In Memoriam segment, it felt like villainy.

If there was one moment where the demand for institutional change felt impossible to ignore, it was Lil Baby's performance of his 2020 protest song "The Bigger Picture," which opened with a dramatized staging of a too-familiar sight — a black man detained, restrained and ultimately shot by white police officers. The artist shared his elaborately produced segment with rapper Killer Mike, who dropped in a verse from Run The Jewels' "Walking in the Snow," and activist Tamika Mallory, who used her moment to address the new administration by name: "It's been a hell of a year. Hell for over 400 years. ... President Biden, we demand justice, equity, policy and everything else that freedom encompasses. And to accomplish this, we don't need allies. We need accomplices."

In the midst of a Grammy night that you could easily argue was the best in years, the moment was a reminder that the collective weariness of the last 12 months is part of a much longer story. There is always more work to be done at the Recording Academy, and in our country. In the end, Billie Eilish may have put it best — not in her ambivalent acceptance speech, but in the song that won her the honor she tried to deflect: "I had a dream I got everything I wanted / Not what you'd think / And if I'm being honest, it might've been a nightmare."