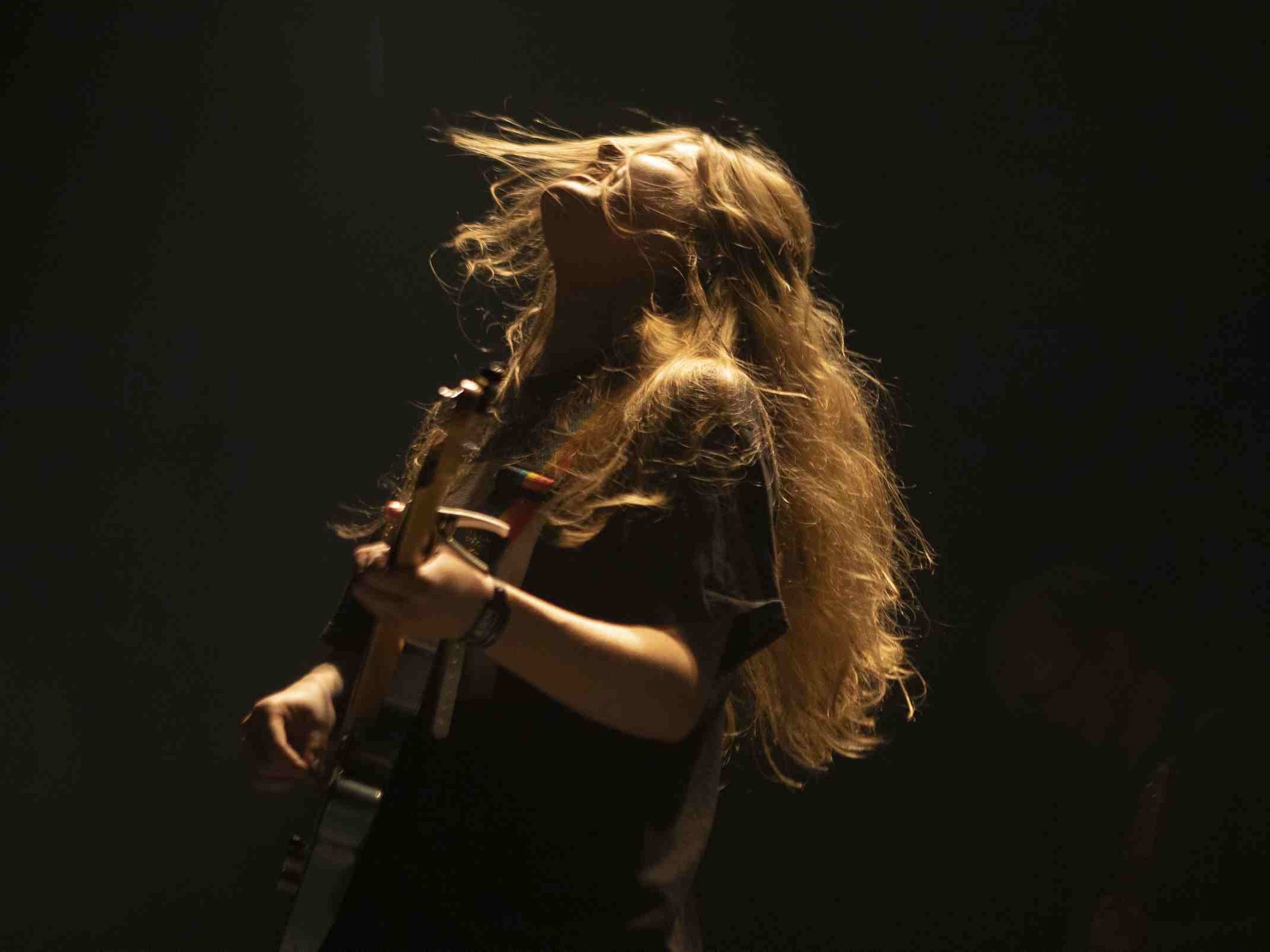 Marie Ulven, who records under the name girl in red, performing in 2019 in Oslo, Norway. // PYMCA/Avalon/Gonzales Photo/Univ, PYMCA

It's a question that means more than you think – it became a coded way for women on social media to ask each other if they're queer. But girl in red is a real musician, also known as 22-year-old Marie Ulven, and her debut is finally out. It's called If I Could Make It Go Quiet.

She joined me from Norway for a conversation this past week – we spoke about her music, her openness about her sexuality and her mental health.

Note: Some parts of this conversation address thoughts about self-harm.

Lulu Garcia-Navarro, Weekend Edition: Before we get to your new music, I want to talk about this meme, about listening to girl in red. What does it feel like holding this space in LGBTQ and Gen-Z culture?

Marie Ulven: I think it's really dope – because I feel like nowadays it's really hard to be able to make that kind of cultural impact. I also just think it's iconic, [Laughs], because people have been connecting with the music so heavily that it now has turned into this.

You do, of course, sing about your love life on this album – there's a great song, "Period" on the album. About that feeling of being too scared to speak up about how you feel. Tell me about what it means to you.

Ulven: This was back in 2019 when I was very much in love with a girl, and she liked me as well – but I really needed the "Do you listen to girl in red?" phrase back then, because I was so unsure if she liked girls. Then I went on tour, and things changed that month that I was away, and that song is about how I wasn't able to speak up about my affection for her.

You're also very honest about mental health on this record, Itoo – 'm thinking of the song "Serotonin."

Ulven: This one I started writing last year, at the beginning of the pandemic, and I was not doing well. I started making music because that's always what I do when I don't know what to do with myself. And suddenly, all of these lyrics were coming out of my brain – I'v ebeen struggling with intrusive thoughts my entire life, and I'm just mentioning a couple in this song, but it's been a lot of those. I've had many different weird hangups, like I haven't been able to swallow food for longer periods of time because I've been so scared I was going to die... just going through so many weird things.

I mean, mental health is a really hard thing to talk about so openly. What do you hope your listeners take away from this song, and your experience?

Ulven: I really hope that people feel less crazy. I think it's so important to just hear that, that a lot of people have these thoughts. I've been scared about jumping in front of trains, been really scared of being at train stations and I've had so many people message me about that, like "I relate so much to this song, I'm so scared of taking the train because I'm scared I'm going to jump in front of it when it comes..." And I've been in the exact same position, sitting down at the closest bench, leaning against the wall... I really hope people feel less crazy, and less alone, and that whatever's happening up in your head is probably happening in someone else's head, too.

You end this album with an instrumental track, called "It Would Feel Like This." Why did you make that choice?

Ulven: I feel like this album is really full of a lot of feelings – it's very big and noisy. And that's kind of what I want to make go quiet, and this last track feels like that quiet place. A white room ... a place that's heavenly, almost.

The album is called If I Could Make It Go Quiet – is this what that sounds like to you?

Ulven: Yes, that's exactly the connection – if I could make it go quiet, it would feel like this.

What Is Activism? Carl Hancock Rux Talks With Lara Downes

The poet and playwright wrestles with the idea of being an activist in America today in its various forms, meanings and misunderstandings.