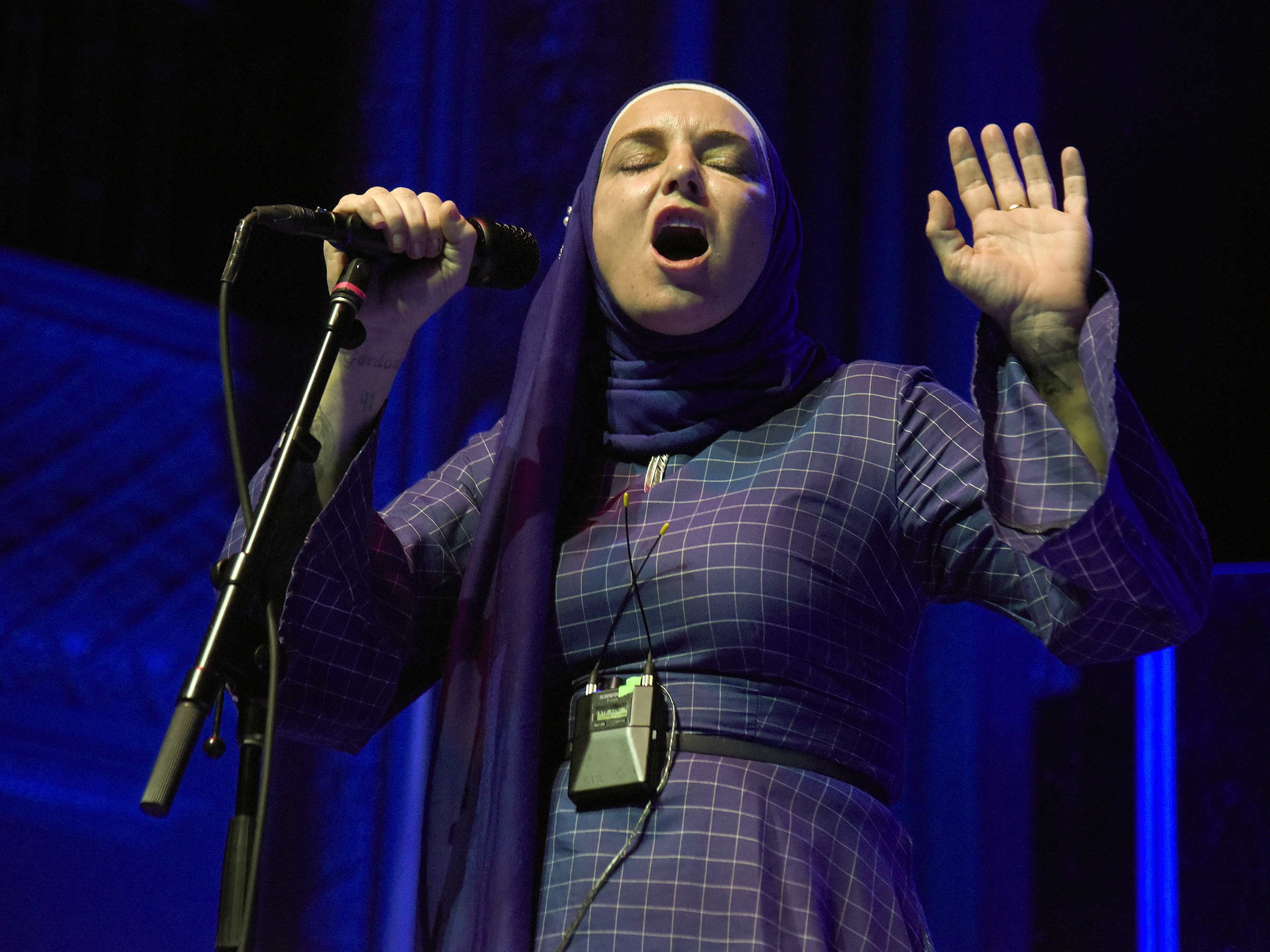 
Sinéad O'Connor rose to fame in 1990 with a multi-platinum selling album. Two years later, a controversial TV appearance on Saturday Night Live threatened to derail her career. Since then O'Connor's struggles have often played out in the public eye. But with Rememberings, a newly published memoir, she's hoping to show there is a lot more to the artist "behind the music."

It all started in Ireland, where O'Connor says she was brought up in an abusive household. Her parents split up when she was nine, and, after a few minor scrapes with the law, she was sent to a notoriously tough Catholic reform school. There, thanks to unforeseen circumstances, her life began to turn around. "Sister Margaret was like a mother to me," O'Connor explains. "There was a punk rock clothes shop in Dublin called No Romance. She took me there and bought me a red parka, and a whole lot of punk clothes, and my first guitar and a book of chords for Bob Dylan songs."

She also brought in a guitar teacher, which led O'Connor to a songwriting collaboration with In Tua Nua, a band signed to U2's newly launched record label. Although O'Connor was too young to tour, she performed in and around Dublin, eventually attracting the attention of the London-based label Ensign. Ireland was an established proving ground for exports such as Thin Lizzy, the Boomtown Rats and U2. But when it came to women, its most well-known artist was a straitlaced pop singer called Dana, winner of the 1970 Eurovision Song Contest.

O'Connor had other ideas in mind, writing emotionally complicated songs that drew attention to social issues, sometimes referencing the difficult circumstances of her own childhood. Dissatisfied with the producer who was enlisted to work on her 1987 debut, The Lion and the Cobra, 20-year-old O'Connor took the reins herself.

When label bosses pressured her to grow her hair and dress in short skirts, she had her hair shaved and took on a decidedly anti-glamorous look. In her memoir, O'Connor writes that Ensign executives also sent a doctor to coerce her into having an abortion when they learned that she was pregnant. Instead, she gave birth to her first child a few short weeks before releasing the album.

As for the music, there was nothing else like it on the radio, says music critic Jessica Hopper: "She just seemed like an emissary from a bold new world." Refusing pop formulas, one of the tracks opened with a Gaelic recitation of Psalm 91 by the singer Enya. Another featured a cameo from rapper MC Lyte. Yet another, referencing a poem by William Butler Yeats, was a dark, intense song about her mother, who died in a car accident when O'Connor was 19.

"She came along at a time when alternative music was just starting to cross into the mainstream, but she was straddling both those things," recalls Hopper, "She was immediately iconoclastic."

The album enjoyed substantial airplay on college radio and MTV. Future Riot Grrrl pioneer Kathleen Hanna says her roommate shared a copy she bought on cassette. "We just sat there in silence and listened to the whole entire record," Hanna recalls. "I don't even think we talked. It felt like being on a journey; it felt like someone had written songs that were already living inside me. It really felt like meeting myself."

The label expected to sell around 25,000 copies of the album; instead, it's sold 2,500,000 worldwide. The Lion and the Cobra earned O'Connor a 1989 Grammy nomination for Best Female Rock Vocal Performance. As a show of support for artists who boycotted the ceremony to protest Grammy's decision not to televise the award for Best Rap Performance, O'Connor performed with Public Enemy's logo shaved onto the side of her head.

She broke even further into the mainstream with her Prince-penned single, "Nothing Compares 2 U," and its unforgettable music video, which vaulted her 1990 sophomore effort, I Do Not Want What I Haven't Got, to the top of the charts in several countries, with estimated sales topping seven million worldwide.

Although O'Connor was nominated for four Grammys, she declined industry awards, asserting that they were too focused on commercial success, and not enough on artistic merit. When she was invited to perform on Saturday Night Live, O'Connor closed her set by tearing up a photo of Pope John Paul II, a gesture intended to draw attention to the Catholic church's complicity in perpetuating child abuse, already the subject of public discussion in her native Ireland.

The Anti-Defamation League condemned O'Connor. So did Madonna and Phil Hartman. Conservative groups steamrollered her records. And when actor Joe Pesci hosted SNL the following week, he threatened to smack her. Two weeks later, O'Connor was booed at a tribute concert for Bob Dylan, signaling the end of one phase of her career, and the start of another.

"She was the first celebrity in mainstream culture to be cancelled" Hopper says. Part of the scandal, she notes, was O'Connor's defiant refusal to act the way we expect pop stars to behave—particularly female artists.

O'Connor says that even though the rebuke was painful, she isn't sorry. She had wanted to use her voice to turn the trauma she had experienced into a powerful healing force.

By the mid-1990s, she'd stopped making hit records, but she never stopped making music. In addition to songs of her own invention, O'Connor restyled Irish folk songs, reggae, and religious music. She brought her unique sensibilities to music made famous by others, artist collaborations, songs made for films and efforts to support human rights.

Over the years tabloid culture has remained fixated by O'Connor's creative and personal permutations, which have included explorations of spirituality and sexuality, candid personal disclosures, and occasionally inflammatory public comments. While male artists such as Bruce Springsteen have been lauded for openly discussing their struggles with mental health, O'Connor not so much.

As her book jacket states, she has "fascinated and outraged millions." But O'Connor has also inspired them, surfacing at a time before an alternative culture marketplace had been fully realized, and broadening the lane for other artists such as Fiona Apple and Michael Stipe to get their music across.

The exposure that came with O'Connor's commercial success had a particularly significant impact on young women, Kathleen Hanna says. "Because she was a punk who ended up making these pop records, or what could be considered pop records, they had such a far reach," she explains. "I think it was validating for a lot of people to hear her on mainstream radio."

Although the pandemic has paused touring, it's given O'Connor the chance to work on new music, and to resume her longtime goals, which she describes as, "Do what I love. Be imperfect. Be mad, even."

The one thing O'Connor isn't planning to do is apologize. "I feel that having a No. 1 record derailed my career," she writes in her memoir, "and my tearing the photo put me on the right track."

Portland musician Kathy Foster shares the music that got her through the pandemic, including 1990s riot grrrl, lo-fi funk and modern R&B.

Whether you're ready for Hot Vax Summer or preparing for a more cautious reentry to everyday life, roséwave understands. Here are 101 songs to soundtrack your summer, wherever you're at.

Featuring everything from Americana, to jazzy R&B and droning metal, there's something for everyone in Oregon's musical community.

'SNL' Musical Guests, Ranked From No. 1 To Morgan Wallen

Every year, Saturday Night Live showcases some of the biggest stars in pop, rock, hip-hop and more. At the end of each season, we rank them with cold-hearted precision.