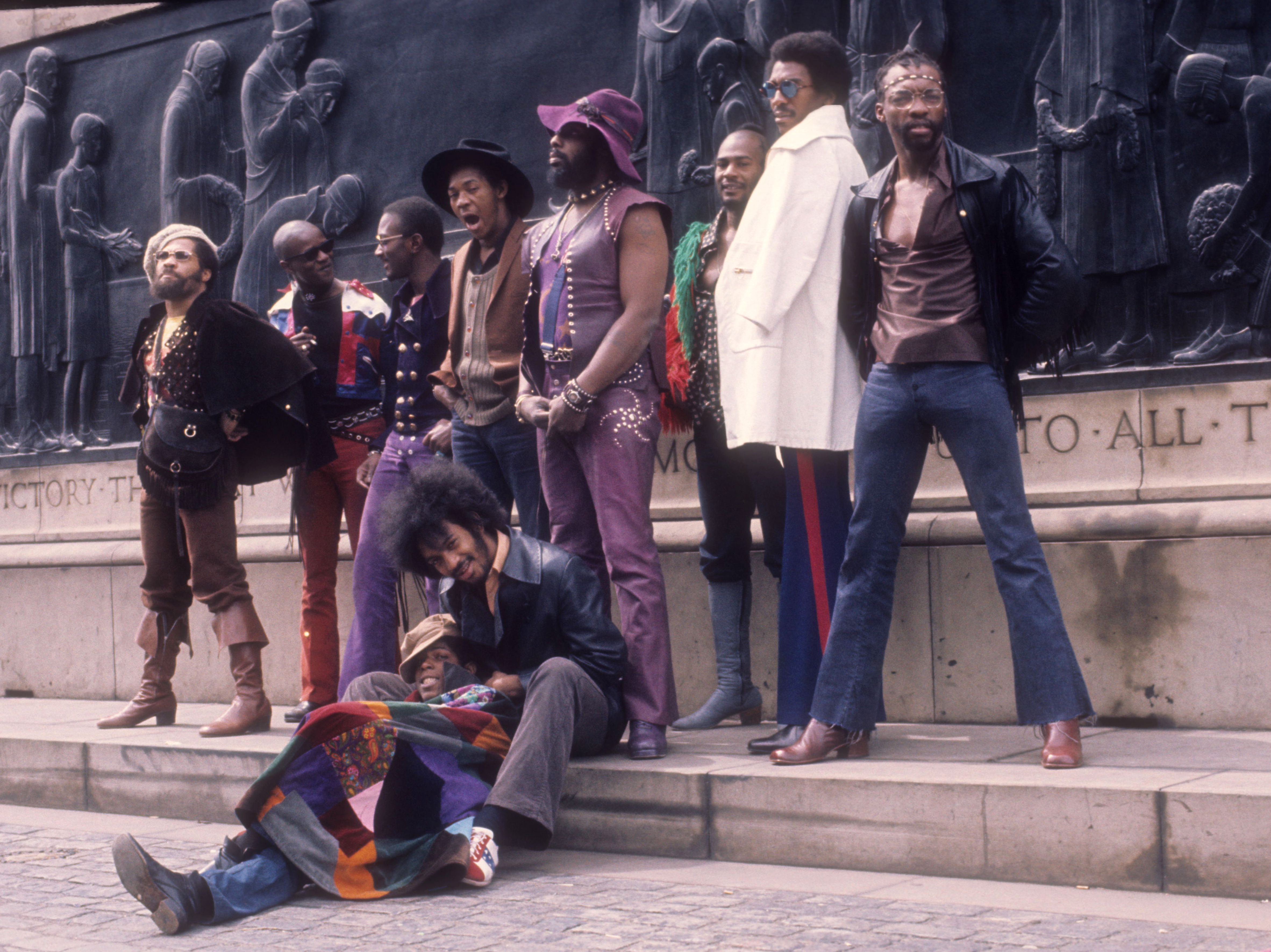 Funkadelic is the result of George Clinton flirting with psychedelic music, a style he describes as "loud R&B." // Getty Images, Michael Ochs Archives


They may be two of the most influential notes in funk-rock history: the soaring, plaintive start to guitarist Eddie Hazel's legendary solo in Funkadelic's "Maggot Brain."

The song, an audacious, emotive 10-minute-long bluesy ballad kicked off by a brief, eccentric poem from leader George Clinton, is centered on Hazel's expansive fretwork. Clinton pulls the bass guitar and drums mostly out of the mix, leaving the sonic field free for sparse backing chords on rhythm guitar and a fiery workout by Hazel fed through a boatload of echo effects.

Both the song and the album that shares its title were released 50 years ago, in July 1971. Clinton celebrates his own 80th birthday today, July 22.

And while there are many music fans out there who might not recognize the song or Hazel's name, artists ranging from the Red Hot Chili Peppers to Widespread Panic and Childish Gambino have acknowledged how Funkadelic's magnum opus inspired their own artistic work.

"It's [an] indelible statement for the ages," says Vernon Reid, lead guitarist for Grammy-winning rockers Living Colour. "It's a piece of music to evoke the ghosts of the past. It evokes the suffering. It evokes the joy. It's a masterwork."

Cultural critic and author Greg Tate, a founding member of the Black Rock Coalition, compares "Maggot Brain" to iconic jazz saxophonist John Coltrane's A Love Supreme: a towering artistic statement that had a significant impact on a generation of players.

"Eddie has this thing that just comes out of his own kinda anguish and sorrow that he translates," Tate says. "There's a cry in every note."

Clinton, the great granddaddy of funk rock himself, says he told Hazel just before recording "Maggot Brain" to play as if someone had told him his mother died.

"All of it is feeling," Clinton says. "Eddie is playing all the feeling in the world. He's sensitive to no end... just a big ball of sensitivity. My mother used to call him 'Ol' Cryin' Eddie.' He could cry so good [on guitar], it was pretty."

Clinton says the enduring nature of Maggot Brain was all part of his plan; passing up pop singles to focus on creating a song and album that fans might return to decades later.

But how did a group that started as a Motown-style R&B outfit unleash one of the most important guitar anthems of the decade?

Moving Away From Motown's Style

The journey towards Maggot Brain reaches back to 1967, when a different group led by Clinton called The Parliaments had a hit with an uptempo dance number called "(I Wanna) Testify."

The Parliaments were a Temptations-style singing group; "Testify" was a typical midtempo groove about a man in love. But Clinton, who had enlisted a teenage Eddie Hazel to back the Parliaments on tour, was increasingly drawn to blending psychedelic rock sounds with funk grooves—especially when The Parliaments went on tour with hard rock bands.

"Vanilla Fudge was one of the groups we went out with," Clinton says. "But we didn't have no instruments, so we borrowed the Vanilla Fudge's instruments. That stuff was so loud. But we realized, right then, this is what it is that made them sound like that."

Vernon Reid says Clinton once told him that the psychedelic era and Summer of Love were life-changing experiences.

"He spoke about how it's the first time he met white people who were genuinely kind and genuinely nice," Reid recalls. "He felt the people he met back then would literally give you the shirt off their backs."

The Parliaments backing band evolved into a rock-edged group called Funkadelic. And they emerged at a pivotal time in music.

At the same time, R&B stars like Stevie Wonder, Marvin Gaye and the Temptations were looking to break the straitjacket of their traditional approaches and experiment with new sounds.

As Funkadelic made its early records, Clinton noticed white rock bands – and their audiences — were focused on blues artists his mother liked from years ago. He reasoned: If he could take an old blues groove and modernize it, maybe he could create something audiences would also come back to 15 years later.

"Maggot Brain was the epitome of that era," Clinton says. "Us flirting with psychedelic...I call it 'loud R&B.' So we called it Funkadelic."

Building the Sound of "Maggot Brain"

Clinton came up with a 10-minute ballad where he unleashed Hazel, who had been listening to records he gave him by Hendrix, Sly Stone and Cream. The whole band played with Hazel in the studio, but Clinton pulled most of the bass and drums out of the sound mix, leaving room to layer even more echo effects on the guitar.

The result was an inspirational tour de force.

"It was a movement," Greg Tate says. "Basically, what everyone learned from Sly and Jimi was that you didn't have to have a lead singer. You just needed to have a great band."

DeWayne "Blackbyrd" McKnight joined Clinton's revolving door of P-Funk musicians and bands in 1978. He says when he heard "Maggot Brain" – well before he would wind up playing the song onstage with Eddie Hazel — it meant something to see a Black man stepping up as a rock guitar hero.

"It was inspiring...a different form of rock 'n' roll that I was identifying with," McKnight adds. "It gave me an avenue to go ahead and explore things I was already playing."

Hazel died in 1992. And although funk-rock fans may know the guitarist's name, Reid says Black guitar heroes like Hazel and Ernie Isley from The Isley Brothers were often overlooked — left off the cover of music magazines by a white-dominated music establishment that didn't quite accept them.

"They were denied their rightful place: no two ways about it," says Reid, who has landed on some of those magazine covers himself. "I feel very grateful. I wouldn't exist without these brothers that did their thing. But it was wild to me... that guitar was such a polarized area."

Clinton, who later developed a more commercial sound with the funk-oriented band Parliament, still plays "Maggot Brain" in live shows, watching his theories about building an audience over generations play out in real time.

"We were too white for Black folks and too Black for white folks," he adds. "But the people that really liked us, stayed with us forever. The Grateful Dead, Widespread Panic—all of us have the same kinds of fans. The grandparents would be there with their kids. It's like going to the circus."

Somewhere, you might imagine Eddie Hazel looking down and smiling at the revolution he helped inspire.

The reggaetón superstar kicks off our "El Tiny" takeover of the Tiny Desk (home) concert series.

The formidable lyricist celebrates eight years of sobriety with this Tiny Desk home concert from his studio near Detroit.

Pastor T.L. Barrett comes to this Tiny Desk (home) concert from his spiritual home, the Chicago church he has pastored for over 40 years.

The Memphis singer-songwriter reworks songs from her debut album, Dawn, from a room inside Electric Lady Studios